Two Motorpsycho books and other goodies 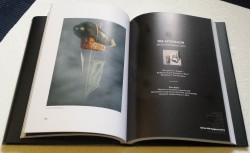 We just got word that the two Motorpsycho books, “Blissard” and “Supersonic Scientists”, have hit German customs, so should be arriving here any day now. Reason enough to get them online in our webshop, along with some of the other new releases that we will have available next week. Order now and we will ship them to you as soon as they arrive here, which we expect to be early next week.

Other than the two books, we also have two excellent Crispin Glover releases to announce: Bladed’s “Halloween in Bagamayo” and the wonderful collaboration between Hans Stenoien and Sugarfoot, titled “Tonight We Bloom”. Both of these albums will be released next week Friday (November 27th), so are now officially available for preorder through our webshop.

And here’s some news that many of you have been asking about recently: the restock of the Child of the Future LP is scheduled for delivery middle of next week. We’ve also put it online, and it will be shipped out as soon as it gets here.

And since we’re busy filling up our webshop with both new and old stuff… we received very, very limited quantities of a few older titles that have been out of stock for a lonnnng time. So if you have a few minutes, take a peek in the webshop and look for those albums (and maybe singles? pro tip: that was a hint) that you’ve been looking for. You just might get lucky!