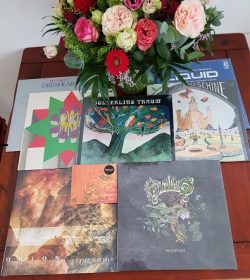 Busy day today! Along with the release of King Buffalo’s Regenerator album – see earlier news post – we are also kicking off the presale for Orango’s upcoming album Mohican (release on October 7) as well as making the Temple Fang – Fang Temple 2CD immediately available. On top of that, we have a nice krautrock special for you, the new Kikagaku Moyo album, some more copies of the Ulv!Ulv! 7″ and represses of 35007’s Liquid and King Buffalo’s Orion. We can also now put the last few remaining copies of Motorpsycho – Ancient Astronauts on violet vinyl and the King Buffalo – Regenerator patch bundle back online. Grab them while you can!

Today is also the release day of Orango’s first single from Mohican, giving you a taste of what’s to come: