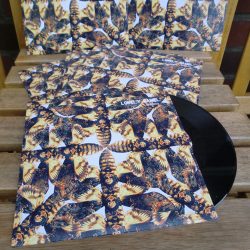 The long-awaited repress of Motorpsycho’s seminal prog rock masterpiece Lucid Little Moments is back in stock now in our webstore. This double LP is pressed on vernal pine green vinyl, perfect to melt away the winter blues (the CD edition is still available as well).

Lonely Kamel are on the road this month supporting their latest album Death’s-Head Hawkmoth and we’ve pressed an extra goodie for the band’s tour. This limited edition 7″ features one album track and a cover of Thin Lizzy’s classic “Emerald”. The 7″ will only be available from the band on tour, from our webstore, and a few selected mailorders at a later date.

Mother Trudy are a new band from Oslo who take part in the Norwegian national pastime of hard rock par excellence. Their debut self-titled record is an ode to everything we love in rock n’ roll from Sabbath to Soundgarden to NWOBHM. Mother Trudy is on presale now and will be released on April 27th on Division Records.