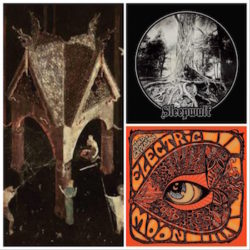 Nobody can accuse us of lacking in musical diversity. Today is a good example: we’ve brought in three new albums dabbling in psychedelic rock, atmospheric black metal and classic occult doom.

Wolves in the Throne Room – Thrice Woven
The most recent album by the kings of American black metal came out in 2017 and heralded a triumphant return to their roots after a few ambient excursions. We grabbed some copies of this 2LP on “dragon’s blood” red/gold marbled vinyl from their last European tour.

Electric Moon – Mind Explosion
New pressing of this very trippy live album from our friends at Sulatron Records/Worst Bassist Records. If you’ve seen Electric Moon live, you know this is where they thrive, and this 2LP showcases the raw psychedelic energy of a particularly good gig from a tour in 2013. Available on orange vinyl.

Sleepwulf – Sleepwulf
Cursed Tongue Records continues to sniff out the truffels of the rock underground and never fails to release new cult classics. Sleepwulf’s debut album hits the proto-doom sweet spot that Witchcraft, Pentagram and Kadavar have since left behind. Available on black vinyl.