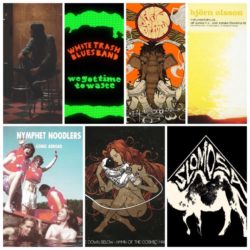 Too many to list in the header! This week we’ve got a bunch of new items for you.

Björn Olsson – Instrumentalmusik… Att Sjunka In I… Eller Kanske Försvinna Till. (LP) – First time ever on vinyl! This instrumental album from the prolific Olsson (Union Carbide Productions, The Soundtrack of our Lives) is the perfect album to submerge in… or disappear through (as the title states, translated). Perfect for fans of Bo Hansson.

Endless Boogie – Admonitions (2LP) – Seven tracks of unrefined wisdom, mostly put to tape in improvised fashion with little to no warning. Recorded over two years and two sessions – at the pastoral tranquility of the Stockholm inland archipelago in 2018, and in the dank, cramped basement of a Fort Greene, Brooklyn studio in February 2020.

Fire Down Below – Hymn Of The Cosmic Man (LP) – On Hymn Of The Cosmic Man, the band takes the powerful elements of their debut – punchy riffs, pummeling rhythms and desert-tinged vocals – and expands on them. As such, the album feels like an adventure that needs to be explored as a whole.

Nymphet Noodlers – Going Abroad (2LP) – Nymphet Noodlers was a Swedish rock band from Karlstad who released their only album Going Abroad in 1994 . The band’s music was heavily influenced by Union Carbide Productions, and Ebbot Lundberg from both UCP and TSOOL was also the producer of Going Abroad. For fans of UCP and The Soundtrack of our Lives, of which both Mattias B. and Martin were members! White vinyl.

Slomosa – Slomosa (LP) – Heavy and melodic, Slomosa is a new band from Bergen, Norway who describes themselves as “a desert rock band from a cold country”. Their highly regarded debut album will bring a smile to the face of all fans of stoner, desert and heavy rock. Red vinyl.

White Trash Blues Band – We Got Time To Waste (LP) – The first full-length from these middle-aged, punky garage rockers from northern Norway following their split 12″ with Quarter Wolf. Sometimes snotty and abrasive, sometimes soulful and groovy.