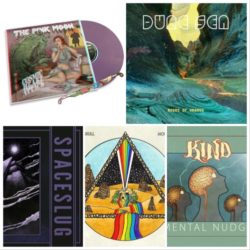 The Pink Moon – Cosmic Heart Attack
LP (colored) + CD + 3D Glasses
The Pink Moon is a psychedelic garage rock band from Trondheim, Norway. Combining the raw power of early protopunk bands like MC5 and The Stooges with the psychedelic rhythm and blues of Small Faces and The Who, they form an explosive and melodic act drenched in the spirit of the 60s.
180gr. colored vinyl including CD and 3D glasses!