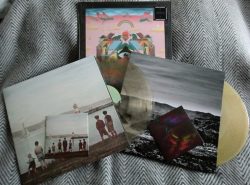 We’re filling the shop with more Norwegian vinyl goodies today. It’s just amazing how much good music can come out of such a small country!

Kristoffer Lo – Trondheimsreisen
Trondheimsreisen is a documentary film from the artists’ home town made up of archive and private footage from early 1900 up until today. Kristoffer Lo composed 20 tracks for the movie + 1 bonus track that is exclusive for this release. Throughout the album he is joined by Trondheim Symphony Orchestra, Ola Kvernberg, Thomas Järmyr & Kyrre Laastad.

Amgala Temple
An overwhelming clash of spontaneity and control – all meshed together in a quest to make something radiant. The mix of Lars Horntveth, Amund Maarud and Gard Nilssen is a wish come true for fans of Norwegian music, as they each have made great impact in an array of projects – be it with Jaga Jazzist, Todd Terje, Bushman’s Revenge etc.. Recorded by Martin Hagfors.