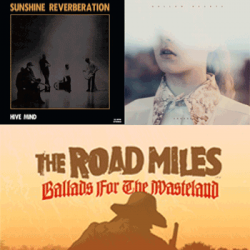 New titles are available today in our webshop:

The Road Miles – Ballads for the Wasteland (Archaeopia)
Loosely based on Steven King’s epic “The Dark Tower” saga, The Road Miles’ second album is a psychedelic desert trip on a cinematic scale. The Athens, Greece-based band’s sand-strewn tunes aren’t so much Kyuss inspired as they are an amplified Ennio Morricone soundtrack.

Hollow Hearts – Annabelle (Westergaard)
Hollow Hearts is an urban country band from northern Norway blending the sounds of blues, rock, pop and folk into their own unique take on Americana music. Echoes of Mazzy Star and Fleetwood Mac can be heard in the band’s gorgeous harmonies and interesting interplay between members. Annabelle is a beautiful album that could have just as well come from Nashville as Tromsø.
Annabelle is out March 16th and will begin shipping shortly before release.