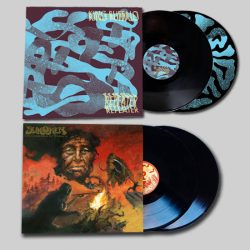 Fresh from the pressing plant, we have a limited number of King Buffalo’s new EP “Repeater”. The record was self-released by the band in the States and they’ve already sold out of their copies, so this is your only chance short of eBay to get yourself one! Three new songs of the band’s hypnotic brand of psychedelic rock provide a great follow-up to 2016’s “Orion”. The B-side of the LP comes with an etching – no need to flip. Since we’ve only got a small quantity, these are first-come-first-served and limited to one per customer.

Also new in the store is the new full-length by Sumokem on Cursed Tongue Records. Hailing from the same city as Pallbearer, the Little Rock, AK band shares much in common with their hometown heroes while retaining their own crushing sound. “The Guardian of Yosemite” sees the band plodding through sludge, progressive doom and stoner rock territory. This 2LP is wrapped in beautiful artwork from visuals wizard Adam Burke.