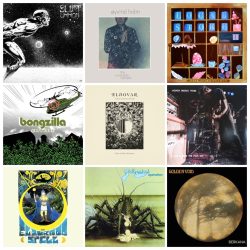 This week’s roundup of new webshop titles includes some golden oldies and some brand-spankin’ new gems, including more copies of the Elder & Kadavar collaboration record Eldovar (which sold out quickly the first time around)!

Elder & Kadavar – Eldovar: A Story of Darkness and Light (LP)
In the midst of the COVID-19 shutdown in Germany, Elder’s Berlin-based contingency teamed up with local heroes Kadavar for a weekend to make some noise. What began as an idea to just jam became a trip on its own, resulting in a heavily psychedelic concept album. New repress on color-in-color blue vinyl. Limited to 200 copies – this variant is a Stickman exclusive!

Slift – Ummon (2LP+DL)
For sulfur guitar lovers, prog from beyond the grave and blip blup blop of old synthesizers; blitzkrieg fuzz and geyser Free; bass escaping from Minas Morgül’s dungeons and Nostromo’s drums travelling at the speed of light. Restock on black vinyl.

Local Store – Pink Paper Hearts (LP)
Local Store is a new band by Norwegian guitar virtuoso Bjørn Klakegg, best known for his Canterbury style prog rock group Needlepoint. Instead of leaning on his talents as a jazz and prog musician, Klakegg and his bandmates have developed over the course of two full-length albums a playful style of folkish indie rock with tinges of 60’s psychedelia. On presale.

Øyvind Holm – The Unreliable Narrator (LP+CD+7″)
The Unreliable Narrator is what happened when Holm – a member of Dipsomaniacs and Sugarfoot and prolific songwriter in his own right – posed himself the question “what would my pop songs sounds like if recorded in a late 70’s Berlin environment?”. For fans of early Brian Eno, Guided By Voices, and Pavement. 180gr. transparent vinyl including CD and bonus 7″.

Birth Control – Operation (LP)
Reissue of the second record from this legendary Berlin krautrock band on the original Ohr label. Produced by the well-known photographer Didi Zill in Hansa Studios in 1971. Heavy, hard-rockin’ and groovy, this album has more in common with early (good!) Scorps than NEU!, and that’s just fine.

Kosmik Boogie Tribe – Let’s Rock The Fuck Out!!! Vol. 2 – Fuzz, Fesk And Fette (LP)
Another heaping helping of punkish rock and roll from Norway’s finest (feat. members of Lonely Kamel and The Good, The Bad and the Zugly).

Kryptograf – The Eldorado Spell (LP)
Following up on the success of the celebrated self-titled debut album from 2020, Kryptograf’s sophomore album takes everything even further back to the 1970s! Inspired by the heavy sound of the late 1960s/early 1970s, the four old souls in Kryptograf offer destructive riffs and inventive songwriting galore. Limited edition on yellow vinyl.