New webshop items; King Buffalo – Longing To Be The Mountain LP back in stock 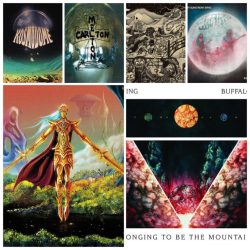 What the title says! We have a psychedelic overload for you this week coming from friends near and far, along with a restock of King Buffalo‘s second LP, which was out of stock for a while.

Naxatras – IV (2LP)
After three full-lengths of highly improvisational instrumental psychedelic rock, Naxatras take a new step in their evolution. Orienting themselves more on structure, the band has crafted a record that draws heavily from the wellspring of 70’s prog rock, heightened further by the new addition of a keyboard player. Pink vinyl in deluxe gatefold. On presale.

Kosmodome – Kosmodome (LP)
The brainchild of two brothers, Kosmodome’s music is riff-based rock with stoner elements all of which are placed within a progressive universe to great effect. Together, the duo bridges the gap between the explosive drive of bands such as Mastodon with melodic magic and retrospective, clever songwriting. Transparent green vinyl with black marbling.

Earthless – Night Parade Of A Hundred Demons (2LP)
Earthless show themselves in prime form on this new album. Darker and more sinister than previous efforts, Night Parade… is inspired by the Japanese tale of the same name. Returning to their traditional super long song format, the record features two tracks – one 41, the other 20 minutes – jammed out into oblivion and beyond. 2LP on black vinyl, etching on D side.

Carlton Melton – Live In Point Arena (2LP)
“Live In Point Arena was recorded during a full moon on the evening of July 18th, 2008. It wasn’t a live show but more a gathering of friends and folks to play some ‘head music’ at Brian’s [McDougal] home which happened to be a geodesic dome and ideal for those types of sounds.” So begins the story of a unique performance chronicled by a portable recorder, which was tape-traded and burned onto CD-Rs for years before finally finding its way onto vinyl. Blue/white/olive splatter LP.

Farflung – 25000 Feet Per Second (LP+DL)
A classic of modern space rock on vinyl for the first time since its debut 27 years ago! Back in the year 1995 this album was out on CD only (Flipside Records) finally now available on high quality 180gr. clear wax, remastered and with a bonus track.