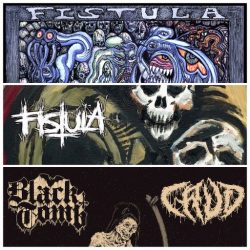 We’ve got three new sludgy releases from Totem Cat in our webstore in limited quantities:

Black Tomb/Crud – Doom Is Dead – Split LP between two of the most exciting newcomers on the American doom scene. Florida’s Crud and New England’s Black Tomb both had releases on Totem Cat in recent years, and their recent combined output is heavier and more punishing than anything preceding it.

Fistula – The Shape of Doom to Cumm))) – The 6th full-length from Ohio’s foremost sludge band is back in press on transparent red vinyl. The masters of self-proclaimed “miserycore” plod somewhere between doom, hardcore and general filth.

Fistula – Idiopathic – The band’s second LP from 2003 finally gets a vinyl release. For fans of Grief, Eyehategod and Iron Monkey. Clear vinyl.