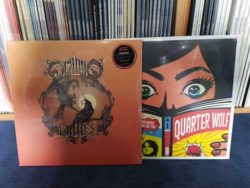 Bored and stuck indoors? At least we can celebrate two new releases!

Okay, Orango‘s Battles is not a new release – it was originally released in 2014 – but it’s been out of stock for a while. This fantastic rock record is a standout in their catalog, and we’re excited to offer a new deluxe version: this 2 LP (one purple, one orange record) is remastered and features updated album artwork as well.

Quarter Wolf and White Trash Blues Band are two bands hailing from Norway. The former is a gritty garage punk duo, while the latter is a 5-piece band that plays dirty, groovy and fuzzy blues. The two have put together a split LP which is out on Westergaard Records.