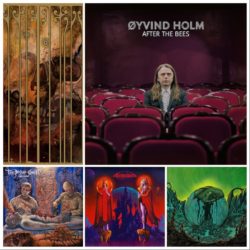 Øyvind Holm – After The Bees (Crispin Glover Records)
Perhaps best known for his work in psychedelic-Americana band Sugarfoot, Holm’s second solo effort is a great, poppy record with some nice 60’s psychedelic vibes, perfect for shaking off the winter blues. You can stream the single “Gut Feeling” now!

Yuri Gagarin – The Outskirts of Reality (Kommun2/Sound-Effect Records)
The Swedish overlords of Hawkwind-inspired space-rock return with a brand new record. Out January 31st.

We are also expecting a limited number of Hippie Death Cult‘s outstanding debut 111 from last year – this record sold out quickly, and Cursed Tongue has decided to break with tradition and do a second run of the vinyl. Our copies are on presale as well and will ship once we receive them.