New Motorpsycho album “The All Is One” coming August 28th 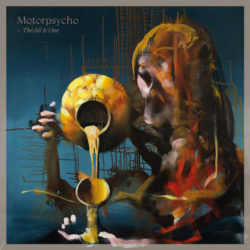 Today we’re happy to announce the first details about Motorpsycho’s new album The All Is One!

The All Is One is the final chapter in the loosely-connected and informally titled “Gullvåg Trilogy” kicked off by 2017’s The Tower and connected by 2019’s The Crucible. Recorded between September-November of 2019 in France and Norway, the album was originally planned for a release in spring but was inevitably postponed due to – what else – Covid 19. However, the moment is ripe for new music and the band has used their extra time to give attention to every detail, resulting in a spectacular double album that is dense and Motorpsychodelic in the best possible way. We’ve been digging into this album the past few weeks at HQ and really excited to share more with you soon!

Release date has been set for August 28th, 2020. Read more about The All Is One in the band’s own words here!