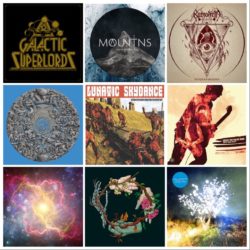 The winter is long (here in the northern hemisphere), and we know you need some new music to pass the time. We’re here to help! Here are our new distributed titles for February so far:

Lunatic Skydance – Electronicmotorcontrol
2LP (golden smoke) / Rock Freaks Records
A long lost gem from the 70’s, finally seeing the light of day thanks to RFR. Lunatic Skydance could be the successor of Seattle’s Mad Season – a grungy, psychedelic monolith.

Mountains – Dust In The Glare
LP (clear/white splatter) / Rock Freaks Records
Mountains take the threads of stoner, prog and grunge and weave them together into a tapestry of huge sounds.

The Notwist – Vertigo
2LP / Morr Music
First new album in years from one of Germany’s most iconic indie groups!

The Notwist – 12
2LP / Community
Originally released in 1995, back on 2LP after an eternity out of print.

Ruff Majik – Seasons
2LP (golden smoke) / Rock Freaks Records
Ruff Majik is a trio from South Africa who have quickly gained a reputation for their intense performances and raw yet multifaceted sound.

Sumokem – Prajnaparadha
LP (bone white) / Cursed Tongue
Sumokem have expanded on their progressive doom metal stylings and made a record that is brooding and majestic.

We also have more copies on the way of two killer releases that went very quickly from Lowrider and Slift, as well as the reissue of Elder’s Live at Roadburn on 3×10″ – check back at the end of the month!