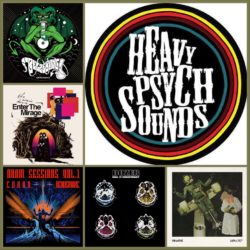 We just got in a batch of new records for our webstore from our friends at Heavy Psych Sounds in Italy – as the name implies, purveyors of some of the best heavy psych rock in the world. Check them below:

Belzebong – Light The Dankness – Belzebong has been at the vanguard of the budding Polish stoner/doom scene since their foundation in 2008. Light the Dankness is four cuts of downtuned, crushingly heavy stoner metal for fans of Bongzilla, Dopethrone and Electric Wizard. Orange vinyl, limited to 300 copies.

The Sonic Dawn- Enter The Mirage – Danish psych rock of the highest order! Enter the Mirage is The Sonic Dawn’s fourth full-length, and was created to have the same energy as the band’s psychedelic live concerts. Blue vinyl, limited to 600 copies.

Conan & Deadsmoke – Doom Sessions Vol. 1 – The first in a series of split LPs between heavy hitters on the Heavy Psych Sounds label. 2 brand new tracks from sludge-doomers Deadsmoke along with the Conan classic “Beheaded”. Red vinyl, limited to 300 copies.

Dozer – Call It Conspiracy – Originally released in 2003, this album and helped further distinguish Dozer’s unique Scandinavian stoner style, a foundation upon which many of their countrymen would later build their success. This 2LP reissue comes on green vinyl housed in a gatefold. Limited to 300 copies.