New albums from Weedpecker and King Buffalo OUT TODAY! 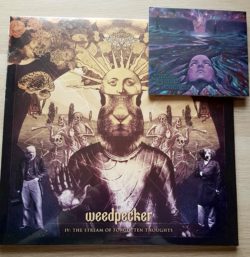 What’s better than one new Stickman release? Here’s the answer!

Happy release day to Weedpecker and King Buffalo, both of whom have new albums out today.

IV – The Stream Of Forgotten Thoughts is the first album by Weedpecker after a major lineup overhaul a few years ago, but the constellation change has done nothing to stop frontman Piotr Dobry and his fellow psychonauts from continuing the progression set forth by the band’s previous records. Less riffy, more heady than their earlier output, “IV” will scratch the itch for more fantastic psych in the vein of early (but heavier) Tame Impala. Good stuff to say the least.

Acheron is more proof that King Buffalo is an unstoppable force of heavy kraut-tinged psychedelic rock – it’s their 2nd album in the past year and another one is already in the pipeline! This record picks up the ‘long song format’ of “Repeater” and draws the listener in with hypnotic grooves, only to blast off into hyperspace. And did we mention it was recorded in a cave? Just check it out already. CD is out today, vinyl stock is expected next month and will ship as soon as it arrives.