Moving Oos – Made From Sin on presale now 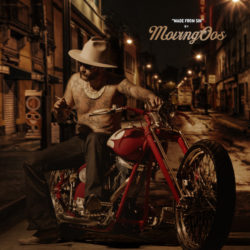 Moving Oos became known in the late 2000’s in Norway, releasing three albums between 2007-10 before hanging up the hat. Taking their name from a Neil Young reference – the artist once described a specific type of backing vocals as such – they gained a following for their soulful, unique reboot of r’n’b-tinged rock. In 2018, the band decided to come out of hibernation with their comeback record “Romancer”. Now they strike again with their latest album “Made From Sin” on Crispin Glover Records!

The band was formed by Per Borten (Spidergawd/Cadillac), Frank Reppen (Blood On Wheels) & Haakon-Marius Pettersen (Turbonegro) and filled out by singer Frankie Castillo. Perhaps more accurately viewed as a collective  of musicians than a standard band, Moving Oos also performs as a backing band for other artists.

“Made From Sin” is available on 180gr . red/black marbled vinyl including CD.