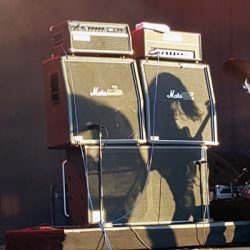 Working with a band as prolific as Motorpsycho in the age of overburdened pressing plants, it’s not easy to always keep everything in stock. That won’t keep us from trying, however! As those of you who subscribe to our newsletter (do it here!) already know, we’ve recently repressed and put back into the shop Trust Us (2LP – white vinyl), Let Them Eat Cake (LP – pink vinyl) and The Death Defying Unicorn (2LP) . Next month we’ll have Little Lucid Moments back on pine green vinyl as well.

Parallel to this, we’ve also been working on a project both new and old with the band — the ongoing Roadwork Series! Beginning with the first volume released in 1999, Motorpsycho has made it the mission of this live series to release new recordings whenever deemed fit. So far 4 Roadwork volumes have been released, one of which was previously only available on video as part of the “Haircuts” DVD.

However, with the wheels turning, Järmyr’s addition to the band and a fantastic tour featuring Kristoffer Lo in the bag, it seemed proper time for not only a 5th Roadwork release, but also to revitalize the entire series!

Re-release, but on vinyl for the first time
Roadwork vol 3: The Four Norsemen of the Apocalypse
Live at the Paradiso, Amsterdam, November 23rd, 2002
(Originally released on video as part of the Haircuts DVD in 05/2008, newly mastered for vinyl)