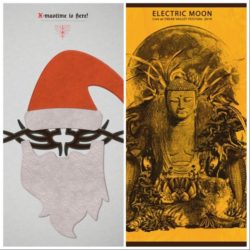 Motorpsycho has announced a special 7″ release to coincide with this year’s holidays, a fun project the band has long since discussed and finally had the time to realize over the months off from touring: X-mastime Is Here. 25 years after the release of Another Ugly EP, the band has re-recorded “Summertime Is Here” as a Christmas hymn, along with an appropriate B-side.

This presale will run until November 24th or stock sells out, whichever comes first. Shipping will take place beginning of December. Limited to 3 copies per customer. No sales to Norway! Norwegian customers should order directly from the Motorpsycho webshop.

Next, today is the release date for a new live album from Rock Freaks Records, Electric Moon – Live at Freak Valley 2019! As always, Electric Moon is a live force to be reckoned with, with no two concerts sounding the same. This 180gr. 2LP captures their full performance from last year’s FVF, even including an off-the-cuff acoustic exploration recorded later during an interview with Rockpalast.