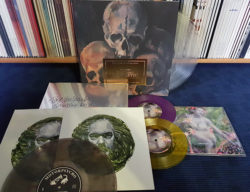 Merry Christmas indeed! We’ve got some exciting new items for you to finish up the year: two tour exclusive releases from Motorpsycho and a brand new Spidergawd 7″.

First up is The Light Fantastic, which Motorpsycho self-released for their last tour. It’s a 10-song album made up of rare tracks and several unreleased ones as well. This record also comes with a unique Connoisseur’s Catalog, “where your inner collector can geek out and potentially fulfill all possible motorpsychodelic needs!”

Next, we were able to get some remaining copies of Terje Brekkstad’s Kosmiske Reise (Pts 1&2), which we had briefly in our store some months ago. It’s a box containing a 10″, 120+ page magazine and a fold-out poster. We’ve got this in three color variations: transparent/black marbled, green/black marbled and straight black.

Lastly, something new from Spidergawd in the form of a 7″ record. Sanctuary 2019 has two tracks: a re-recorded version of the song ‘Sanctuary’ from Spidergawd II and a cover of a cover – a traditional folk-blues song from Telemark interpreted by Mattis Kleppen & Resjemheia, and now re-interpreted by Spidergawd. This 7″ is available on purple and transparent yellow vinyl.