Mos Generator – The Firmament out now 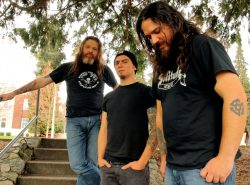 We are very proud to announce our next release by Port Orchard’s foremost heavy rockers Mos Generator, The Firmament. Recorded live in an airplane hangar as part of the abstract live concert film “Songs for the Firmament”, the five song album moves back and forward in time with new and re-written older material, as well a killer Joy Division cover. While the film follows a strange, supernatural phenomenon in the Pacific Northwest, The Firmament follows Mos Generator expanding their sound in more explorative and progressive ways, pushed further by guitar work and the addition of Rhodes piano by guest musicians Bo Mcconaghie and Andy Sorter. The album lands on 09.09.2016, of course on 180gr vinyl with CD included.