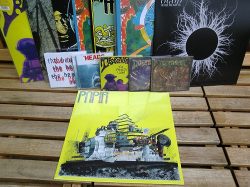 We have a ton of releases hitting the webshop today, including new releases, re-releases and plain old “back in stocks”. First and foremost, we’re happy to finally get the first Papir album, self-titled, out on Stickman Records. This new version is freshly mastered, on 180-g neon yellow vinyl and includes a bonus track not available on the original LP. It’ll hit the shops on August 31st, but we will ship out webshop orders immediately.

We’ve also been able to re-stock quite a few of The Heads titles, including the very popular “Everybody Knows” boxset, which sold out instantly the first time we put it online. Simon of Forte UK in Wales, our dealer in all things The Heads, has also sent us a couple of other titles from another label he runs, Creepy Crawl. And last but not least, we’ve got new titles in from Cursed Tongue and Totem Cat.

So with no further ado, here is a list of what is now online and ready to ship: