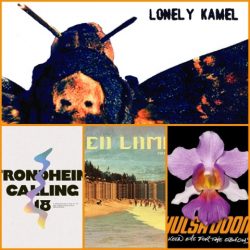 We’ve got a lot of updates for you today!

Today we’re beginning presales for the new Lonely Kamel album Death’s-Head Hawkmoth. To accompany this, the record’s first track “Fascist Bastard” is streaming via The Obelisk and VISIONS Magazine, in addition to being available as a digital single at your digital music provider of choice. Death’s-Head Hawkmoth is out on March 23rd on beautiful 180 gr. white vinyl and CD. Check the new song, and preorder the record here!

Our webshop also has some new titles:

Various Artists – Trondheim Calling ’18 (Crispin Glover Records)
A compilation of songs composed by local musician and recording engineer Per Borten (also of Spidergawd) together with hand-picked musicians from the city’s bustling scene. The record was commissioned by the festival of the same name to celebrate the local talent and is available on clear vinyl with rainbow splatter. Available immediately.

Red Lama – Motions (All Good Clean Records)
Second full-length from this 7-headed Danish psychedelic monster. Building on the rhythmically dense, hypnotic formula of their first record, Motions also brings in influences from kraut rock, British trip hop and Talk Talk-ish art rock of the 80’s. Motions is out on February 23rd and on presale now.

Thulsa Doom – A Keen Eye For The Obvious (Duplex Records)
The first new record from Thulsa Doom in 12 years! Once seen as something of a “Kyuss of Norway”, the band brings back their heavy rock style with a new swagger, incorporating elements from the whole rock spectrum. Check out the single “Lady Nina” here! A Keen Eye… is out on February 16th and on presale now.