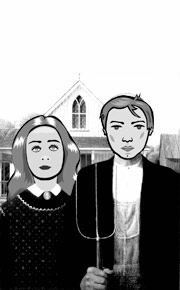 Stickman Records was founded in late ’94 by Rolf and Jeannette Gustavus for the sole purpose of releasing and promoting the music of the norwegian band Motorpsycho. We discovered a few other great bands along the way and now, years later, we can look back on a large number of releases, from a slowly but ever-increasing roster of bands. Starting out in the southern German city of Nuremberg, we moved to Hamburg at the end of the ’90s.

The mothership Stickman concentrates on good uncommercial independent rock in the broadest sense of the word. We have a definite weakness for weirdness, reflected in such releases as The Tussler soundtrack and the Matt Burt album, and are also suckers for a good melody with a rough edge.

Two years after founding Stickman, we started up the sublabel “Sticksister Records”, which offered a forum for more pop and emo-oriented bands. It’s been a long time since we released anything on Sticksister, and there are no current plans to do so again…but never say never!

At the very beginning of Stickman we represented several Scandinavian labels in Germany including Progress Records from Norway and Birdnest Records from Sweden. Now, after more than a decade and a half of concentrating solely on Stickman, we are once again helping out some Scandinavian friends spread the word about their labels throughout Europe. We are currently working together with Crispin Glover Records, Blues for the Red Sun, Division Records and Lyte Records, all from Norway. Thanks to this cooperation, you can also find such fine bands as Spidergawd, The Devil and the Almighty Blues, Orango and many more bands mentioned on this website and available through the mailorder.

From our extremely humble beginnings we’ve grown into a small yet important part of the European independent music scene, and we look forward to many more years to come. Sticky, broke and confused since 1994!