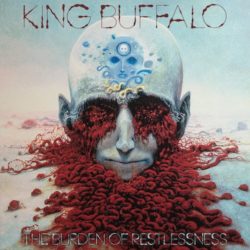 King Buffalo have announced the first of three new albums to be released this year, The Burden Of Restlessness. Presale for the record begins today! We have two exclusive vinyl colors: oxblood and royal blue.

Self-recorded in late 2020 and early 2021 by guitarist/vocalist Sean McVay, bassist Dan Reynolds and drummer Scott Donaldson, The Burden of Restlessness continues to push King Buffalo’s progressive aspects forward into new avenues of melody and exploration. At the same time, the album is not mistitled. There are deep undercurrents of frustration and even an aggressive pulse that coincide with the spaciousness for which the band has been so widely lauded since their 2016 debut, Orion.

Presales will ship shortly before release date on June 4th, 2021.