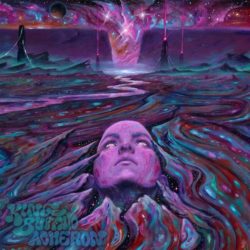 What will inevitably be known as ‘the cave record,’ Acheron is the second LP recorded by the band in just a single year. It follows this spring’s The Burden of Restlessness and finds the Rochester, New York, trio expanding their sound once again.

Both records – and an intended third in the series to follow in 2022 – were born of the pandemic-era touring shutdown, as evinced by the grim themes of The Burden of Restlessness. Acheron – named for the “river of woe” in Greek mythology – brings the tension and disquiet of the prior offering into a new context.

In addition, brand-new Stickman editions are on their way of three of the band’s previous records (these had previously only been self-released on vinyl): The Burden of Restlessness (2021), Dead Star (2020) and Repeater (2018). All of these will be pressed from new lacquers and sound better than ever!

Presales for ALL OF THE ABOVE will begin this Friday, October 22nd.

Acheron will be released on CD/digitally on December 3rd. The LP version is coming later!!

Vinyl for all four titles will ship as soon as it arrives in January. Thanks for your understanding.