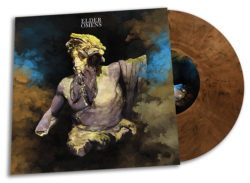 We’re kicking off presales immediately for the new Elder album, which is available on 2LP and CD! The vinyl version is available on limited-edition 180gr bronze marbled vinyl (a one-time webstore exclusive!) as well as on 180gr azure marbled vinyl. The album comes in a deluxe gatefold including an 8-page booklet and download card.

And if you want something to listen to, you can also stream the first single “Embers” now!

Here’s what guitarist/vocalist/songwriter Nick DiSalvo has to say about the song: “Embers is doubtless one of the most energetic and upbeat songs Elder has ever made, and really became the favorite to play while rehearsing to record Omens. It’s maybe the least traditionally heavy track from the record, but it’s certainly dense. Lots of interlocking guitar and bass lines, keyboards, synthesizer solos (thanks to our friend Fabio Cuomo!) – you can hear that we had plenty of fun making this album. Like any Elder song, it’s best heard in context, and we’re excited to release the full record soon!”