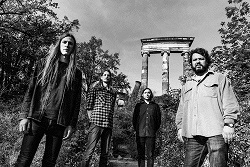 In the last dozen years, Elder has stepped out of the shadows of their peers in the heavy rock underground to emerge a unique voice, delivering album after album of almost unparalleled consistency and creativity. Omens, the band’s fifth full-length record, is the newest pillar in the construction of their own musical universe. Across five songs and 54 minutes, Elder further embrace experimentation in their brand of progressive psychedelic rock in which atmosphere, melody and structure are created and transformed again and again.

“To me, Omens is our most complete work to date: a set of songs that express the breadth of the band’s collective influences,” explains singer/guitar player Nick DiSalvo. “After recording The Gold & Silver Sessions EP, it felt like we fully scratched the itch to explore our minimalist side, taking a step back from the proggy song structures and heavy guitar work of our previous records and just letting the music drift along. When returning to work on Omens, the goal was to integrate these two tendencies in the band – to make a modern day progressive rock record, but also to take time to jam and float when need be. Most importantly, I feel the spirit of adventure in our music is alive and well, and we missed no opportunity to bring in a whole new arsenal of sounds to the record.”

The band has already announced US tour dates to support the record – European dates and presale news will follow soon!