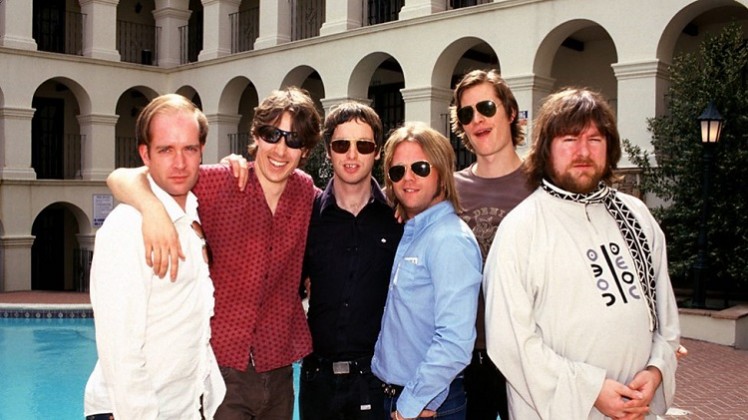 The Soundtrack of Our Lives, often abbreviated T.S.O.O.L., was a Swedish rock band that was formed in Gothenburg in 1995 and disbanded in 2012. All lyrics are sung in English. The band’s style draws heavily on sixties and seventies punk and rock, such as Rolling Stones and Iggy and the Stooges. Psychedelic rock forms another strong influence, and psychedelic and mystical references are also prominent in the band’s lyrics and aesthetics. The abbreviation “OEOC”, which features on all their albums, refers to the phrase “as above, so below” from Hermeticism.

The band was originally formed by Torbjörn “Ebbot” Lundberg, Björn Olsson, Ian Person, Kalle Gustafsson Jerneholm, Fredrik Sandsten and Martin Hederos. Several members, including vocalist Ebbot Lundberg, had previously played in the punk rock band Union Carbide Productions. Olsson, who as guitar player had helped craft the band’s sound, left T.S.O.O.L. after its first release, “Welcome to the Infant Freebase” – which found wide acclaim in Sweden – to pursue a solo career. He was replaced by Mattias Bärjed, who, like other members, has also engaged in solo and spinoff projects.

The band found critical success in the United States in 2002, with their third album “Behind the Music”, released the previous year in Sweden. It was nominated for the Best Alternative Album award at the 2003 Grammy Awards. They toured the US in 2002 with Oasis in support of the album.

Their double album “Communion” was released in November 2008. After a tour of the US the band announced that they were working on their next record “Throw It Into the Universe”. In October 2010, the band announced it would be releasing their first ‘Best Of’ compilation entitled “Golden Greats no. 1”. According to a statement on the their website: “The band has spent much of the summer of 2010 in Svenska Grammofonstudion [sic] where they remastered the original recordings and in part picked up nuances that somehow went missing. With the carefully restored and remastered versions we are invited to TSOOL classics in a way we never heard them before.”

In early 2012, the band announced on their website that their latest album, “Throw It to the Universe”, was complete. The album was released on 18 April 2012.

Lead singer Ebbot Lundberg stated in an interview with Intro Magazine that “Throw It to the Universe” would be the band’s final album, stating that he felt it completed the band’s journey. The band performed its last show on 12 December 2012 in Stockholm. (Text used from Wikipedia.)

Stickman Records entered the picture in 1999. As big fans of T.S.O.O.L. and vinyl addicts to boot, we were frustrated by the fact that you could not find the band’s albums on LP. After getting no response regarding the vinyl rights for this amazing band, we called around, got the address of singer Ebbot and sent him a package of Motorpsycho vinyl. He called a week or two later saying “we want you to release our stuff on vinyl!” and got the ball rolling. Following this phone call, we then released “Welcome to the Infant Freebase”, “Extended Revelation”, “Behind the Music” and “Origin Vol. 1” on heavy vinyl with beautiful gatefold covers.

THE SOUNDTRACK OF OUR LIVES