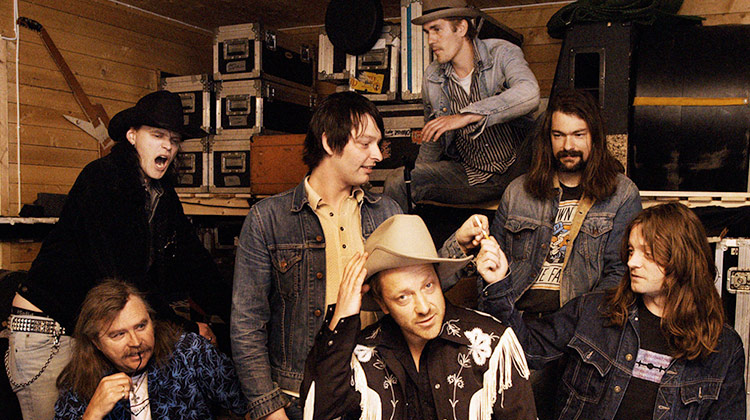 Having spent most of the 90’s in hiding from the law, the International Tussler Society finally reappeared, guns ablaze, on various stages in the mid-00’s. The impetous for their sudden reappearance was the re-release of their so far only recorded legacy “Soundtrack from The Tussler”, by many regarded as the finest C&W record ever to come out of Norway. On discovering that the chemistry that made the posse such a vital band all those years ago was still there, the natural thing to do was to record some more music. 12 newly-composed odes to outlaw life (the road, booze, dogs, pretty girls and other etheral subjects) were recorded over a 10 day period in the barren and cold climate of the Trøndelag mountains in mid-winter, and the result is the red hot record titled “Motorpsycho Presents The International Tussler Society”.

Stylistically the album ranges from pure country (Shitbox Ford, Laila Lou) via dark but beautiful balladry (September, Morning Rain) to epic southern rock workouts (The West Ain’t What It Used To Be, Cassie (Call on Me), Satan’s Favourite Son) and acoustic folk music (When We Were One).They even found the time to cover a song by their fellow Trondheimers and patrons Motorpsycho (The Skies Are Full Of…Wine?).

The recording session was filmed by the good folks at Mayasmomentum, and all copies of this record come with a bonus DVD including a ‘making of’ documentary, promo video, outtakes, easter eggs and more! As much in debt to Marty Robbins as to the Grateful Dead, The ITS wears its heart on its sleeve and its tongue firmly in cheek, and sees its primary task as trying to reclaim country music from the plastic clutches of Shania Twain, Heidi Hauge and their ilk.

Country music is the white mans soul – It’s not always pretty, smooth, radio-friendly or even danceable, but it’s always honest and true. The International Tussler Society is as honest as they come these days.

“That ‘Ol White Line” from the album The International Tussler Society