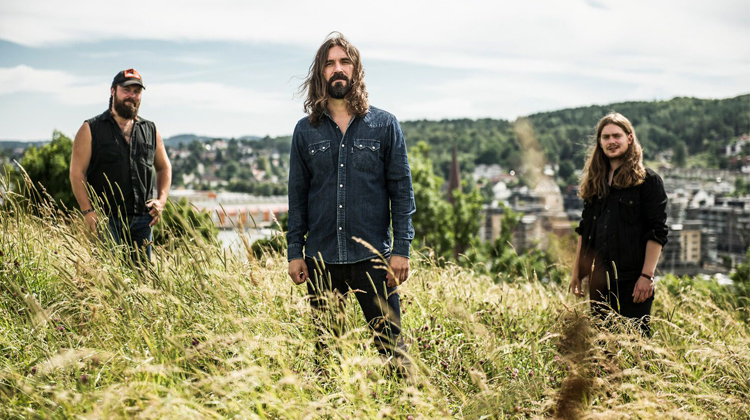 Orango is a Norwegian rock band best known for safeguarding and developing the legacy of traditional classic rock and trademark three part harmony vocals. Helge Bredeli Kanck (guitar/vocals), first cousin Trond Slåke (drums/vocals) and army friend Karl-Joakim Wisløff (bass/vocals) formed the first incarnation of the band in Oslo in the late summer of 1999. They immediately included a fourth member, Jon Iver Helgaker, playing Hammond organ and Fender Rhodes. The band used several different names before they chose to settle on Orango in early 2000. Various challenges with regards to the transportation of the keyboard instruments then led the band to continue as a three piece. The band started playing concerts in Oslo and the surrounding areas, where they rapidly got a reputation for being a solid and entertaining live act.

Crafting their sound through a creative blend of influences such as folk, folk rock, classic rock, southern rock, rock´n roll and a selection of harmony vocal outfits, the band then recorded their music for the first time during the spring 2000 – the result being ”The Mind And Money EP”. The release later in 2000 led to more live bookings, and the band performed on a regular basis over the next year. In the winter of 2001, they recorded a second EP, ”Something Good”, at Atheltic Sound studios in Halden. The release was followed by more live work, before the band gathered at Grand Sport Studios in Oslo to begin work on their first full length album. Recording sessions were constantly interrupted by the band’s extensive live commitments, which resulted in the album never being finished (the infamous ”Grand Sport Tapes” has yet to be released).

During the summer of 2002, the band, having become increasingly dissatisfied with the recording situation, suddenly decided to leave Oslo and move to the tiny village of Seimsfoss on the Norwegian south-west coast. The trio borrowed a house that originally belonged to drummer Trond Slåke’s grandparents and turned the basement into a modest recording studio. Over the next year Orango wrote, rehearsed and recorded material for the album that became ”Villa Exile”. The band returned to Oslo in 2003, and the album was released in 2004. ”Villa Exile” soon became a critically acclaimed milestone for the band, who then continued their extensive tour and live activity. During the autumn of 2004, at the band’s preliminary artistic and commercial peak, various events led the trio to put the band on hold. They never gave any reasons for the decision, and speculations have run high ever since. In retrospect, it’s likely that disagreements concerning the future artistic development may have caused rifts that led the band to take a break.

In 2011 Orango then suddenly released a new album, ”Confessions” (Division Records), taking both audiences and the music business by surprise. The new album marked the beginning of a steady run of album and single releases and an extensive body of tour and live commitments that continue to last to present day. For the ”Confessions” album, the band had teamed up with long time friend, engineer and producer Kai Christoffersen, and the album was recorded at Subsonic Society during 2010. After having toured continuously through 2011, the only break being the recording and release of a new single in May the same year, the band then gathered at Ocean Sound Recordings, Giske, Norway, where they recorded close to 30 new songs over a period of two weeks. These recording sessions and  additional work at Calmeyer Studio, Oslo, resulted in two new album releases, ”Colonial Militia Vol. 1” (2012) and ”Colonial Militia Vol. 2” (2013). The band played hundreds of live shows at clubs and festivals before returning to Ocean Sound Recordings in late summer of 2013.

These sessions birthed the album ”Battles” (Division Records, 2014), which also became the bands first proper album release outside their home country, as the band teamed up with the Hamburg based record label Stickman Records, who then released ”Battles” in selected territories outside Norway. During 2014 increasing commitments with regards to even more live work and new recording sessions to follow up the critical and commercial success of  ”Battles”, led to bass player Karl-Joakim Wisløff choosing to leave the band. Wisløff was replaced by bass player and singer Hallvard Gaardløs. Being more than ten years younger than the two remaining band members, Hallvard Gaardløs contributed high and new spirits that all but matched his musical skills and professionalism, and the bass player rapidly became and important contributor to the band’s artistic development. In the spring of 2016, the band recorded their new album, ”Mules of Nana”, which was released in January  2017.