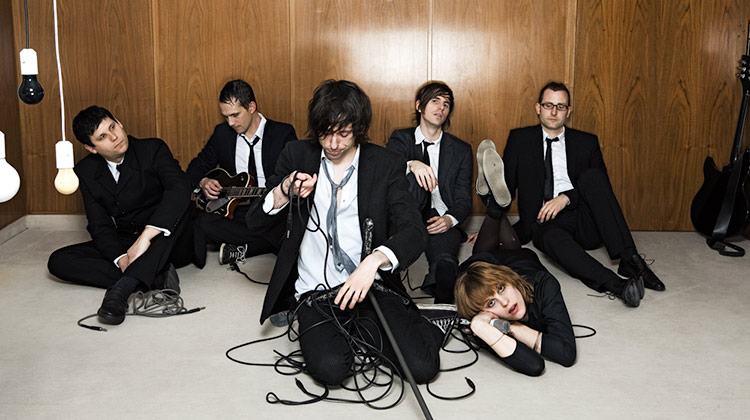 Monochrome – a band consisting of Helm Pfohl, Marten Thielges, Dominik Thomann, Christian Specker and two singers: Marc Calmbach and Kate Complikate. Monochrome – two US tours to date and a constant barrage of shows throughout Europe – in squats, galleries, discos and horse stalls. Monochrome – along with numerous EPs, they’ve released the albums Laser (1999), Ferro (2003), Éclat (2006), Caché (2008), and then Unita after a long break of six years. Monochrome come from Stuttgart and Berlin, Germany and Basel, Switzerland.

In the last 20 years, as they mutated from Dawnbreed to Monochrome Collective to Monochrome, they’ve never made a secret of the fact that they don’t respect borders, whether geographically or stylistically. Unfazed by the need to be “hip”, they also don’t bore us with statements about or against what is considered cool in music today. Where post-hardcore, D.I.Y., sophistication, pop and oddball dance rock meet, that’s where you’ll find Monochrome. Hard without showing off their muscles, soft without being kitschy.

The main statement you will find Monochrome making is in the way they present their music: in their beautiful album packaging and in the production of their music. For example: produced and mixed by the band themselves, the mastering of Caché was done by Bob Katz of Orlando, Florida. Known as the ultimate audio guru, he knows that loud doesn’t necessarily mean dynamic, and that amps don’t have to go up to 11. And he knows how to put the grandeur of a song in the forefront. He wrote about the band on his website after the mastering and called Caché “a real triumph”.