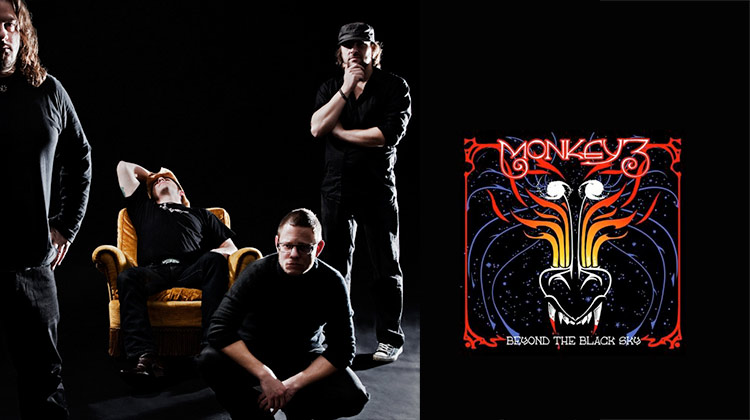 The year 2010 was really busy for Monkey 3: after having played at the famous Roadburn Festival 2010 (Holland) and the Hellfest (France), the band started recording their fourth album: “Beyond the black sky”, which was released on Stickman Records.

The quartet decided to work with a young and talented producer: Johann Meyer. The result of this collaboration is an album which will certainly become a classic and be important in the career of the band. Monkey 3 found their own sound and their own way: the best combination of modern and vintage vibes. An instrumental album which drives you through a disturbing and mysterious dream. Monkey 3 is well-known for their amazing live performances, which they prove time and time again during their numerous tours.

The band was founded in 2001 and already had a stoner-rock and psych vibe, which will remind you of Black Sabbath, Led Zeppelin, Pink Floyd, Mono or Pelican. With their first self-titled album, which came out in 2003, Monkey 3 received great reactions and reviews all over Europe, placing them as one of the best newcomers in the stoner rock genre…

Their second album, “39 Laps”, released in 2007, contains a mind-bending cover from one of the biggest cinema classics “Once Upon A Time In The West”, from the Master Ennio Morricone. The third album, “Undercover”, is actually an EP featuring covers (Archive, Kiss, Pink Floyd, Led Zeppelin and Deep Purple) and contains songs with two awesome singers: the Legend himself, John Garcia (Kyuss, Hermano), and Tony Jelencovich (Transport League, M.A.N.). Due to the success of this record, the band hit the European roads (France, Germany, Belgium, Netherlands, Austria, Switzerland) from October 16th until November 7th 2009.

After our release, the band moved on to Napalm Records and released their follow-up album “The 5th Sun”.