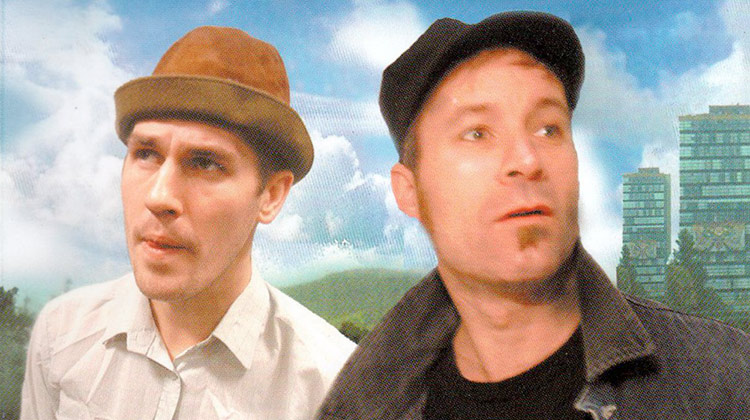 You’re a tired and weary traveller along a lost highway of modern music, where “alt.country” and “Americana” are quickly becoming an outlet mall of bargain bin melodies and bland 2 for 1 specials. Where “country” is but a shimmering Vegas mirage of all flash and no substance. You’re tired, you’re hungry, you’re lost. But as your eyelids droop and your head nods toward the steering wheel, suddenly salvation is at hand…next stop: SEB’S HOTEL!

The proprietors are none other than HGH, or the Hagfors-Gebhardt-Hickstars. Check in to Seb’s Hotel and settle in for a stay. Breakfast is extra (oh who ever gets up on time to make it to breakfast anyway?) but a soundtrack is included. By the hour or by the week, each room has a colourful history and a story to tell.

Martin Hagfors, frontman of Norway’s Home Groan, joined up with his buddy and ex-Motorpsycho drummer Haakon Gebhardt to make some music. Together with Hellbilly Lars H. Haugen they recorded the first HGH aka HagforsGebhardtHaugen album, “Pignoise”. Acclaimed by critics and appealing to a wide audience ranging from Home Groan fans to Motorpsycho devotees and Hellbillies, the band toured clubs at home and abroad, along with playing high-profile festivals such as Glitterhouse and Norwegian Wood. Haugen chose another path shortly after “Pignoise” came out, which left HGH. Luckily, the duo didn’t need to change their name after all; instead, they carried on as the Hagfors Gebhardt Hickstars: a couple of singers, songwriters, guitarists, banjo pickers, toy piano players, adept at all manner of bells and whistles – their musical prowess seems limitless. Soon came “Trash Grass and Love Songs,” which HGH proudly described as a sophisticated advance in recording – the album signalled a move from 1 track in a rustic cabin to 2 tracks in Geb’s living room. Filled with likeable and instantly memorable gems, wonderfully twisted Spike Jones-style weirdness and gentle ballads, “Trash Grass” was supported by an extensive European tour, during which the pair saw the light and began to preach the word of the benevolent, omnipotent Father Seb.

The album “Seb’s Hotel” followed hot on the heels of that tour, much of it having been recorded on the road, on a ferry, in various hotel rooms and people’s kitchens. Using instruments including the more traditional banjo, guitar and kazoo to household appliances and treasures unearthed at flea markets or dusty forgotten attics, Seb’s Hotel is a hymn in praise of roadtripping, friendship and making music.

Father Seb’s Love-Tolerance-Movement began to grow, and it was time for a new record. “Miracle Working Man” praises the glory of Father Seb, and he was moved to join Martin and Gebhardt once again on the road. But who is Father Seb? Perhaps you will meet Him at an HGH show. Behold and bear witness to the glory of trash grass!