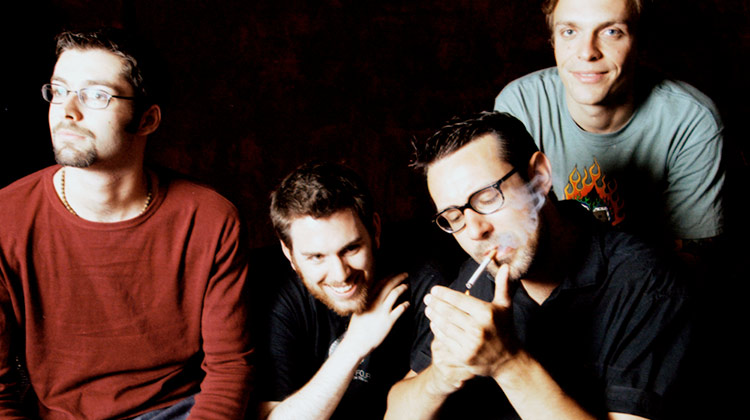 Favez. Rock Band. Lausanne, Switzerland. It doesn’t happen very often that we get floored by demos sent to us but these guys managed to sweep us off our feet twice in one week. First they graced us with the wonderful acoustic album “A sad ride on the line again” and a few days later we received a four-track EP, “Coming Home”, proving to us that they can rock like hell.

A few days after we received and listened to the two demos we were able to get the boys to play support for The Delgados in Hamburg and were totally convinced of their live potential. Bottom line: we listened, we saw, we signed.

Favez were friends since school and they played music together for well over a decade. The only thing they had in common with Spinal Tap is the fact that they went through the same number of drummers (or even more?). They released their debut album in 1993, followed by two EPs “Arrogance” and “Eloquence” (all under the name The Favez Disciples) which sold very well in their home country. They also toured through the Benelux, in Germany and even in Canada before ever having any kind of “official” record deal.

“A Sad Ride on the Line Again” was released on Sticksister at the beginning of ’99. The band then went on the road in Germany and Switzerland with Fireside, whom they also happened to be big fans of. The tour proved to be a big success, with even the usually reserved German audiences rocking-out to Favez every night. At the same time, Favez also signed to Doghouse Records for North America and Howling Bull for Japan.

After the tour Favez went back into the studio and recorded “Gentlemen Start Your Engines” which was released in February 2000. The album was recorded in New York under the direction of producer John Agnello, known for his work with such bands as Dinosaur Jr., Screaming Trees and Patti Smith. Followed by constant touring and two EPs, “Headed for the Ocean” and “I’ve Got Everything I Need”, Favez were definitely keeping themselves busy.

And so it continued. Picking a bad time to record in New York, mid-September of 2001, Favez managed to get their album “From Lausanne, Switzerland” recorded with only a small delay – and then went on tour through the US. The album was released in Europe in February 2002, accompanied by a single and a video to “The Ages of Wonders” and a European-wide tour.

The constant touring took it’s toll on the band, however, with bass-player Phillipe and later drummer Fred no longer willing or able to keep up. The band then welcomed Yvan on bass and Fabrice on drums, and the two new members definitely gave the band a different sound.

2003 saw not only the release of Favez’s album, “Bellefontaine Avenue” as well as the single “Emmanuel Hall”, but also singer Chris Wicky’s first solo album under the name “The Sad Riders”. The album was once again followed by a European tour. But different this time around is the fact that the band recorded and mixed the album in bass player Yvan’s own Bellefontaine Studio. Being under no time (and budget) pressure, the band was for the first time ever able to record and produce the album exactly the way they wanted it and to spend as much time as needed trying out ideas, vocal harmonies, etc. The end result proves that the band was right in deciding to go the DIY route this time around!

In February / March 2005 Favez’s last album on Sticksister was released, titled “Old and Strong in the Modern Times”. It brought with it the band’s first charts entry in Switzerland and was followed by a European-wide tour and lots of festival gigs throughout the summer.

The band then went off in a completely new musical direction and, musically speaking, we no longer saw eye to eye and decided to not release their next album. But we still love the guys and enjoy working with Chris, who runs our Swiss distribution!